This is going to be nuts, a powerhouse group of individuals joining forces to throw down a bunch of rock and roll tunes we all know so well. Those who are in will be treated to the highest extent.

A special evening of joy, camaraderie, love and music.

Doors – 7pm / Music – directly following the Bengals vs Chiefs game (which starts at 4:30pm) / $20 / 21+
This Sunday, them fellas of Steely Dead are giving us another evening of joy, playing a an early show featuring all Jerry Garcia music. Jerry Band, Reconstruction, Pizza Tapes, Garcia/Grisman, a Dead tune or two – it’s all on the table and the Sunday gospel is awaiting us.
Thanks for your love and dedication to live music, this one will be a very intimate and special evening for those in the room!!!

SunSquabi returns to OTP! These are some of our favorite guys, and we are once again fortunate to host them. Let’s rumble this valley!!!

“SunSquabi has gained national attention for their unique way of producing music. The band’s live show can be described as an ‘Electronic Hydro Funk Experience’ that is different every single time out. SunSquabi continues to break down and analyze the expectations of what a “Live-Electronic” band should be.”

21+ / Doors 9pm / music 9:30pm / $15 advance / $20 day of show
Ghetdown Network is hosting a couple of amazing producers by the names of Labrat and Elevated Mind!
There will be heavy bass, electronic beats and tons of characters, let’s party!

We are very pleased to get Dogs In A Pile over here to OTP. Got a good feeling we will watch this one grow through the years to come!!

The sandy shores of Asbury Park, New Jersey are hallowed ground in the northeast; the rolling waves have ushered generations of venerated musicians to worldwide acclaim. Dogs in a Pile, an eclectic quintet, has emerged as the heir apparent to the town’s rich musical legacy. Merging funk, jazz, and rock and roll with psychedelia, the quintet presents a completely original vibe built on kaleidoscopic soundscapes eerily reminiscent of the days of yesteryear.

Dogs began when Philadelphia University of the Arts guitar gun-slinger Jimmy Law began playing with young Joe Babick (drums), a student at the Count Basie Theater program in Red Bank, NJ. Lightning struck when they were introduced to Berklee School of Music student and bass player Sam Lucid, who immediately suggested fellow Berklee student and keyboard player Jeremy Kaplan. The addition of fellow Berklee student Brian Murray (guitar) in 2019 made for the quintessential final piece in the Dogs’ puzzle.

A string of successful local shows drove the development of a massive northeast fan base, affectionately known as the Dog Pound. The band’s astronomical growth culminated in an epic, sold-out performance at the legendary Stone Pony in Asbury Park during the summer of 2021. Armed with a fresh batch of new material, Dogs in a Pile is taking its perpetually evolving testament to the Great American Songbook on tour in 2022, visiting plenty of new cities and spreading good music and good energy to good people along the way.

We know what you’re thinking. How has Dopapod never played OTP? We agree and could not be happier to finally host this raucous dance party!!

The quartet Dopapod—Eli Winderman [keys, vocals], Rob Compa [guitar, vocals], Chuck Jones[bass], and Neal “Fro” Evans [drums]—present albums as experiences meant to be shared out of your speakers and on stage. Traversing time travel, palindromic labyrinths, and binary pairs in a greater cohesive mystery, Dopapod’s forthcoming self-titled album ties the conceptual ends of the group’s discography, while charting a path forward. The group’s hypnotic hybrid of funk,rock, jazz, bluegrass, and electronica has packed shows coast-to-coast, and earned acclaim from Rolling Stone, Guitar World, Glide Magazine, and more, while reeling in millions of streams online. Their immersive, expansive vision as a group continues to conjure alchemy nearly fifteen years into their journey with the release of their seventh album, Dopapod out in spring of 2022.

So the Fuzzheads. These young men and hungry to let it loose, they bring a dance party of the ages. Last year when they played for us they covered songs spanning the 60s to today, they played originals that including foot-stomping, in-your-face guitar riffs, heavy rhythms and killer vocals.

Our relationship happened when the guys from Goose had the Orebolo show booked but that was cancelled due to the C word. Peter’s life-long friend and bandmate in Great Blue, Ethan, reached out to see if The Fuzzheads could play. We obliged, and our relationship is forever growing and has in turn become an enormous silver lining of losing that Orebolo show.

Intertwining the classic sounds of the Grateful Dead and Steely Dan!!!

Not many people have ever heard Steely Dan music live, although just about everyone in the world has heard Grateful Dead tunes. Some people live for each band while other people love so many of both band’s songs but have no clue they are listening to Steely Dan or the Dead. This quintet hails from Denver, led by the A-Bear (Hebert) brothers on guitar and bass, boasting dueling keys and one of the most rhythmic drummers in the state, and they shred every room they play.

Cycles is an explosive power trio out of Denver with high-octane guitar + heavy slap bass.

This band is dope. We have watched the evolution of Cycles through the years, and it has been a treat. The energy released from this trio is on a whole different level, constantly keeping the room moving and waiting for the next moment of ground-shaking bliss. 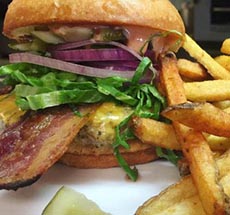 Check out the menu. 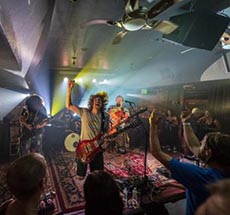 Check out the events. 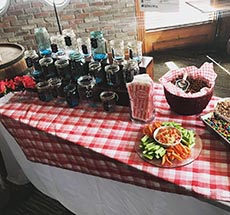 Rent the place out! 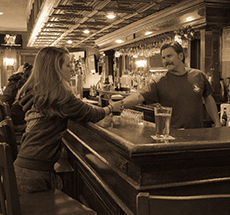